Why were you inspired to take part in last year’s B2B?

I was inspired to take part by my father who had died in November the previous year. My father had lived with Alzheimer’s for seven years before his death and I wanted to do the ride to honour my wonderful dad and to raise awareness and money for Alzheimer’s research and support for carers.

Brilliant! The wet and windy weather didn’t impact on the event. All the training rides had done the job of making the ride so much easier and the team spirit was strong. The support from the organising team was excellent – with cars following and leading the groups, refreshments provided along the way and an excellent stop and presentation in Kiama.

They were invaluable! When I signed up for the ride, I had never ridden in a bunch before. I had no idea how to follow and what things like ‘rolling’ meant. The ride captains patiently helped us gain those skills, giving us the confidence to ride in the bunch on the day. The other thing that was incredibly meaningful was sharing our stories as we did the training rides. I made some really good friends – there were such lovely people taking part.

Did your riding and fitness improve?

Yes – enormously! Once we had got over 100km in the training rides, every ride set a new record for me. My ability to spend longer in the saddle improved enormously and I gained some really good bunch riding skills (although I still have a lot to learn!).

Will you take part in B2B again this year?

Yes, I am looking forward to taking part in the B2B this year – just trying to twist the arms of my support crew (my best friend, Joanne and my husband, Andrew) to join me again.

I raised funds by using social media (regular updates on Facebook as I completed training rides and LinkedIn). I also put a tag at the end of my email signatures to help get the word out. Finally I talked to close friends and family who were all happy to contribute some money to Dementia Australia in honour of my dad.

Feel free to add in anything else?

Since doing the ride, I have had two of my closest friend’s parents diagnosed with Alzheimer’s disease. This year I would like to dedicate my ride to their battle – to Stasia Franken, Hugh and Fenja Clarke.

Would you recommend the ride to others? If so why?

I highly recommend this ride to anyone who has been touched by Alzheimer’s or knows of people who have. It is a ride with an important mission – to raise awareness and money for Alzheimer’s research. The organisers are amazing and it will be an event you will never forget.

Why were you inspired to take part in last year’s Bondi2Berry?

My main motivation was to make sure that I kept riding consistently through winter. But once I started training and going to some of the events, I realised that the benefits were bigger and better than that.

I loved it. I found it easier than I’d expected and really enjoyed the group I was riding with. The stops made it less intimidating than it could’ve been and it was great rolling around chatting to different people in the group. Then there were a few beers in Berry.

To me, they were the key to enjoying the ride. They forced me to consistently improve my fitness and I met plenty of the other riders, so I knew who was who when we rode to Berry. The rides always felt safe and well organised, with ride-captains dedicated to each group.

Did your riding and fitness improve from taking part?

Definitely. I was the fittest I’ve been in years by the time the event rolled around. And it made me enjoy cycling more, because I kept improving.

Will you take apart in Bondi2Berry again this year?

Probably. And if I don’t, it’ll be because I’m looking after my two kids while my husband does the ride.

I put out a few requests online and put on a paid morning tea at work. I’m not great at fundraising, but the target isn’t too high, so people shouldn’t let the need to fundraise put them off participating.

Have you been touched personally with any personal connections suffering from dementia?

No. But working in health as a Wellness Manger I’m well aware of its prevalence and think we all need to work towards funnelling more funding this way.

Would you recommend the ride to others?

Definitely. It’s still the longest ride I’ve ever done and I could only achieve that because of the support with training rides and the event that B2B provides. I’m so glad that I did it and am sure that the other participants would feel the same way. It’s a beautiful course and you can finish up with a night in Berry – what’s not to love? And it’s a great fit for everyone from beginners to cycling superstars, because you only need to stick with your allocated group.

Bondi2Berry 2018 is complete for another year. 80 riders, 155km, 28 volunteers and over $130,000 raised for Dementia Australia. Thank you to everyone who has supported us and contributed to the success of this ride. Shout out to Hattie Morgan 52 Flicks for the awesome video and Arnaud for the drone footage. See you in 2019!

Take a few minutes to have a read of this article in the SMH…a different take on where researchers should target in order to get closer to a breakthrough for a cure. And a good reminder of the risk factors, with a lack of physical activity a high risk factor for dementia.

Shout out to Studio 10, chef Jason Roberts, the lovely Natarsha Belling and Ita Buttrose, for talking about Bondi2Berry on the program today. Natarsha and Ita are ambassadors for Dementia Australia and work tirelessly to help raise awareness of dementia. Check the link for the full segment, and Jase’s recipe for the chicken wings! 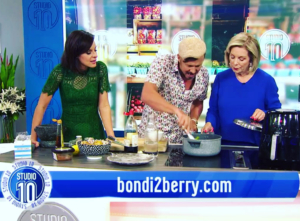 Thank you to Rebecca Franks from news.com.au for sharing her personal experience of dementia. Rebecca wrote a piece about BondiBerry in 2017 supporting the ride and helping to raise awareness of dementia, the second leading cause of death in Australia.

Bondi2Berry was the largest community fundraiser for Alzheimer’s Australia NSW in 2017. Thanks for the feature in your year in review.

Thanks to Sarah Berry for the great article featuring the Bondi2Berry in the Sydney Morning Herald.

The Ride to Remember is back in 2017. Following the success of the inaugural ride in 2016, 60 riders will take on the 155km challenge from North Bondi to Berry on the NSW South Coast. The ride will raise awareness of dementia and fundraise over $75,000 for Alzheimer’s Australia NSW to help find a cure for dementia.